My third day (second full day) at Tassajara is the day I finally begin to feel settled. I'm more comfortable physically and clearer mentally, and I'm starting to internalize the schedule, instead of having to run back to the announcement board all the time to check on what I'm supposed to be doing next.

At the morning work meeting we have guests: representatives from Esalen Retreat Center, New Camaldoli Hermitage, and the Esselen Nation. They have gathered here today for the quarterly meeting of the Four Winds Council, the four spiritual centers based in the Ventana Wilderness (Big Sur). An Esselen elder speaks to us about the history of Tassajara. "This is a holy place," he tells us. "Long ago, we used to bring our sick and elderly people here so they could bathe in the healing waters." He welcomes us all to this place and thanks us for taking care of it. This gesture, when taken in context with all that has happened between that long-ago time and now, is breathtaking in its graciousness. He leads us in a joyous call-and-response song of greeting in the Esselen language that brings tears to my eyes. "Ike [ee-KEH]!" he says, in closing, which means "Yes!" or "It is good."

I wish I could lurk in the shadows at the Four Winds Council, but there is work to be done. This morning I am assigned to kitchen duty. I get to crack a whole bunch of eggs in a row, which I enjoy immensely. Then I chop some vegetables. The morning goes quickly; I've never really been into cooking, but I think I could get used to this kind of work. 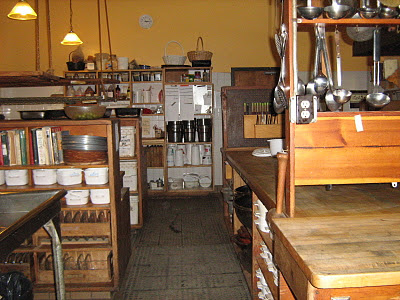 The kitchen at Tassajara is a well-oiled machine, which comes as no surprise. The place is famous for its food, has inspired several popular cookbooks, and in the summer months feeds hundreds of wealthy guests. Even an influx of volunteers who are unfamiliar with Tassajara ways doesn't seem to faze the kitchen staff. The hierarchy reminds me of my time working on tall ships: the tenzo, or head cook, is responsible for meal planning, much as the captain selects the course a ship will take; the fukuten, or kitchen manager, supervises the kitchen staff and makes sure the tenzo's plans become reality, in the same way that a first mate directs a ship's crew. Today's fukuten delegates the instruction of new folks to other kitchen staff, and before I commence chopping, I am trained in the proper way to use, carry, and clean a Tassajara kitchen knife. 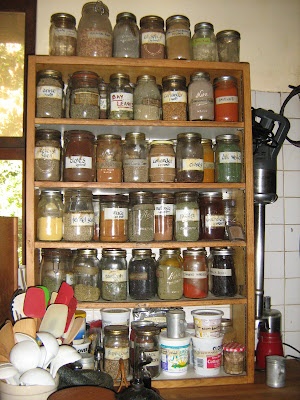 Though it doesn't come up today, later I will learn that work in Tassajara's kitchens is supposed to be conducted in "functional silence" -- speech is only to be used as necessary. I struggle with this; the screened food prep area outside the kitchen seems to me an ideal setting for casual conversation, and I get restless when left to do monotonous work with nothing but my own thoughts to entertain me. I understand that it's a lot easier not to cut yourself when you're fully focused on what you're doing, and I also understand that being present in the task at hand is just as much a part of the spiritual practice at Tassajara as formal meditation. I understand the rule, and I respect it, but I still don't like it. Some fukutens are more strict in their reinforcement of the rule than others, and I find I enjoy kitchen work significantly more when it is more loosely applied.

After lunch I rejoin a couple of my fellow workers from yesterday to deep-clean the Lower Shack, a tiny pantry containing what the work leader describes as "all our controlled substances:" tea, coffee, and sugar. There are also tubs of beans, cleaning supplies, and, alas, ample evidence of Tassajara's mouse population. (As Buddhists have reverence for all forms of life, there are no lethal traps here; however, a couple of monastery cats roam the premises.) The three of us wipe down shelves, tidy up their contents, and move stuff around in the small room as though we're playing that old sliding-tile game. We eschew functional silence in favor of continuing and building upon yesterday's conversations. One of my companions doesn't call herself a Buddhist, but regularly meets with San Francisco Zen Center and has been volunteering for Tassajara work periods for years; the other is a mostly-retired filmmaker who still does occasional work for the National Museum of the American Indian. Both are full of good stories.

At dinner I chat with Allen, another volunteer who practices at San Francisco Zen Center. (SFZC and Tassajara are part of the same organization, as is a third location, Green Gulch Farm; all are residential centers of Zen study, and members frequently circulate between them.) When he learns that I came here knowing next to nothing about Zen, he is eager to answer any questions I may have. Alas, I tell him, I still know too little to even know what questions to ask. He beams. In Zen, he tells me, the quality of beginner's mind is something every expert strives for. Later, in a book by Shunryu Suzuki, the founder of SFZC, I will find the quote he refers to: "In the beginner's mind there are many possibilities, but in the expert's there are few."

Allen tells me not to be intimidated by the formality of Zen practice; the formality in itself has no value. Its purpose is to focus your intention and your presence of mind. A lot of people think that the purpose of zazen (meditation) is to empty your mind, he says, but that's not really what it's about. Zazen is about studying yourself in order to know yourself so that, finally, you can forget yourself. If you don't know yourself, you are always going to be getting in your own way. This is the most practical and appealing explanation of zazen I've yet heard. He adds the reassurance that it's more than okay to make mistakes here: "This is the least judgmental place you'll find anywhere."

I appreciate Allen's down-to-earth Zen 101. If I needed any reassurance that what I learn here will be useful to my pursuit of spiritual growth in a Christian context, he has given me plenty. But Zen is kind of a slippery fish. Everyone here I speak to about it will tell me something a little different, giving me a new piece of a complex, multi-dimensional, and often paradoxical puzzle.

This evening, instead of zazen, we meet in the dining hall for a "dharma talk" from Abbot Steve, who has come from SFZC to attend the Four Winds Council earlier today. His address gently rambles between topics, all loosely interconnected. He says that our lives are not separate from the forms of life around us, that our bodies, the body of the earth, the bodies of the crickets we hear in the background, are all one with the body of Buddha. This phrasing is interesting to me because Christians also often refer to the "body of Christ" -- but when we do so, we mean "all the Christians." This "Buddha body" is a much more expansive categorization.

Another contrast appears when he touches on the subject of the afterlife. "Paradise is now," he says, "because there is only the present moment: there is only now... now... now....  To wish for something else, for some other paradise, is kind of disrespectful of this body." I believe in an afterlife, but I have to admire the humble contentedness implied by this statement. I agree that, for me, this life is enough and more; whatever comes after will be... well, I was going to say icing on the cake, but if what I believe is true, it's more the other way round. Still, I live in good health and reasonable prosperity in a wealthy nation, and so, I presume, does Abbot Steve. For us to say that this life is enough is, perhaps, not all that much of a stretch. It seems to me that the promise of comfort beyond this life, or the disavowal of such, holds a very different weight for those who are less comfortable here.

He repeats a story a friend of his told him, about a time when she became frustrated with her carpool buddy's persistent silence. Her irritation built and built until she asked herself, "What if I stop this story in my head about what should be happening? What if I just sit here and be comfortable with my own breath?" And then, she told him, everything seemed to be perfect.

"The work of [Zen] practice," he continues, "is to carefully investigate your tendencies, your preferences. Not just your preferences but your obsessions, what drives you. When you notice a 'should', what if you bring in [a spirit of] inquiry and curiosity, rather than one of judgment?... [That feeling] can just be heard and invited to relax. What's the fear behind it? What's driving it?"

After taking a couple of questions from his listeners, he closes by serenading us with a song from the great blues musician Lead Belly, called "Relax Your Mind." Soon we are all joining in on the chorus: