Settling In (or Not)

People carrying trays of food walk back and forth between kitchen and dining hall, and the rest of us loiter in the courtyard between, waiting for dinner. Many of us are drinking tea from the self-serve tea/coffee bar, with which I am utterly delighted. 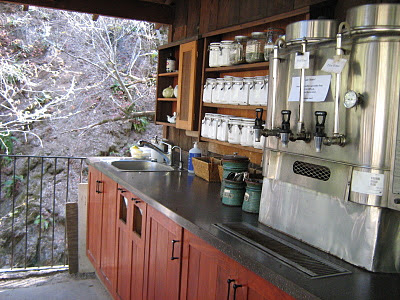 Just look at all those tea options in the white jars!

Finally, everyone forms two lines facing each other, and at the signal of two sticks of wood clacking, all bow with hands pressed together. We proceed casually into the dining hall, each bowing once more before picking up a plate and silverware. Again this nudge toward mindfulness; it's like saying grace without words. 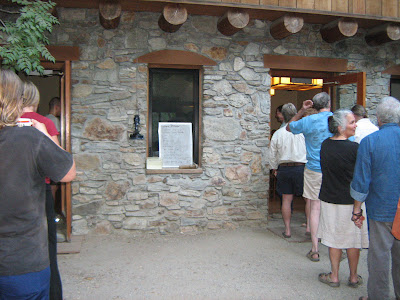 Dinner is some kind of amazingly delicious kale/garlic/cheese glop over rice, chips with salsa and guacamole, a tasty salad with grapefruit and jicama, and chocolate pecan pie with giant bowls of real whipped cream. Wow. I load my plate up and find an empty seat.

Tassajara's year cycles from the busy summer months, when it opens to vacationers as a hot springs resort, to the austere winter season of study and meditation. Inbetween are the spring and fall work periods, when volunteers are invited in to help with cleaning, repairs, and preparation for the season to come. Just now, when everyone is dressed casually, it's impossible to guess who is a volunteer and who is a resident, let alone what sort of hierarchy exists within the monastery itself. My dinner companions turn out to be volunteers who have been here many times before. They are full of helpful information and interesting stories.

One tells about the great forest fire of 2008, when the entire facility was evacuated except for five monks, who chose to stay and protect the monastery from fiery doom. The story of how they successfully did so was published this year in a book called Fire Monks, which proves easily the most-talked-about book of this two-week session. It was written by "a friend of Tassajara," as one resident describes her, and during my time here I will discuss it with many people, all of whom seem to think it was quite well done. I'll acquire a copy from the bookstore at 10% off on my last day here, thinking, I'd like to write this kind of thing someday, and eventually even get around to reading it (though at the time of this writing, that last bit hasn't happened yet).

After dinner, I do a bit of exploring with my new roommate. We wander quietly through a lovely garden full of flowers and herbs. 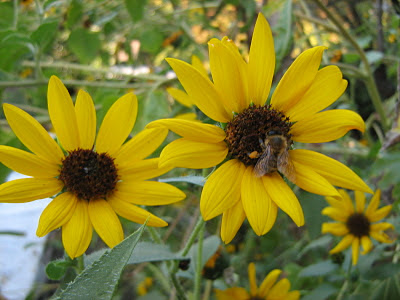 Elaine has heard mention of a free box somewhere around here. We both like free stuff (and I have some stuff to give away), so we are determined to find it. It turns out we were misinformed, though; in the student quarters, we locate an entire wall of well-organized shelves of free things. This is good resource management; I like it! 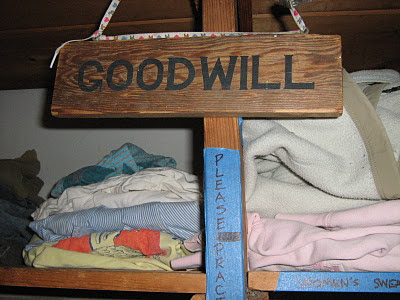 Soon enough, the bell is ringing from the zendo. Tonight, instead of the regularly scheduled meditation, there will be a special full moon ceremony. I figure this will be a great introduction to Zen Buddhism.

In retrospect, I think it may not have been the best way to begin. I've been feeling an underlying resistance against this place since I arrived, specifically the Buddhist aspects of it, or rather, how I imagine them to be. I imagine Buddhists are supposed to be very serene and impassive, quiet and restrained. I mean, that's what Zen means, right?* But I don't feel like a serene person. I feel like I have to fake calmness to fit in, which makes me feel cramped.

And there's a further complication here: I'm a Christian. Though I'm genuinely interested in learning about Buddhism, and strongly suspect there is a lot to be learned here that will complement my own faith, I'm expecting not to be wholly on board with this whole Buddha-program. So all of this underlying resistance kind of comes to a head during this ceremony.

There is a lot of standing, bowing and kneeling, a lot of bells and drums and chimes with a lot of silences inbetween. I have no idea what's going on, but it does go on... and on. There is ceremonial lighting of incense (Tassajara uses the good stuff, which, unlike most incense, doesn't irritate my throat) and lots of chanting in various languages. (Here is the text of the ceremony in PDF.) The English-language chanting is done in the same way as the traditional Japanese: monotone, without the normal inflections of speech. It sounds like everyone is pretending to be a robot. The priest leading the chanting has some odd nasal intonations which give him an extra robot-y voice. I like this aspect of the ceremony, and I enjoy chanting along with some of the stuff I can understand and agree with. But this evening, the things I don't agree with hold my focus. I don't claim to take refuge in Buddha; Buddha is just all right with me. I'm not nonviolent; in fact, I can think of a number of situations in which violence sounds like a fairly good idea. I'm not interested in forswearing intoxicants, and while I agree it's bad to speak ill of others, I'm pretty sure I haven't done that for the last time.

Another part of my discomfort is that I'm forced to rely on the guidance of others to direct me through this ceremony, and it makes me uncomfortable not to know what I'm supposed to do next. And another part is that I'm really, really tired. All of this adds up to me being good and sick of the ceremony by the time it finally ends (it's probably been all of about 40 minutes, but it feels like forever) and I can go to bed. Lying down feels very, very good.

Before I fall asleep, I flash back to a moment after dinner when Elaine said contentedly, "I feel like I've been here forever." She explained that she feels she's fully arrived in this place, not still thinking back to home and what's behind her. And indeed she seems to have wholly settled in. I don't feel that way at all. When I close my eyes I'm still behind my bug-splattered windshield, lurching white-knuckled over that rocky mountain road, and when I stare at the ceiling I can only hope to feel half as settled before the two weeks of Work Period are up.
Posted by Lindsey at 6:12 PM