It's been a rollercoaster of a month.  I came to the LA area with the intent of volunteering as crew on the schooner Tole Mour, but (to make a long story short) that didn't pan out. My interactions with Tole Mour's crew, some of whom are old shipmates from my days aboard the Hawaiian Chieftain, led to connections with the crew of the twin brigantines Irving and Exy Johnson and, ultimately, an invitation to come down to those boats in San Pedro and volunteer.

So I commuted to LA Maritime Institute in San Pedro for several days from the place I was staying in Long Beach, and helped out on the Exy Johnson. I let it be known that I'd prefer to be a liveaboard volunteer, and the crew was enthusiastic in their support of this idea. There were four liveaboards on Exy at that time, all coming up on the end of their contracts and all more than ready to have another experienced deckhand aboard to share the work.

But the crew doesn't run the organization, and those who do dragged their feet.  It began to look like the paper-pushing end of LAMI might not make up their minds what to do with me until about the time I was ready to leave the LA area. Whether or not I wound up living aboard in an unofficial capacity in the meantime, dear reader, I leave as an exercise to your imagination.

Ultimately the office gave me the okay, but until that point, I was unsure what I could blog about my current living status that might not be rendered inaccurate within the next 24 hours. Also, life on a tall ship keeps you pretty busy, and also, the boat doesn't have internet access. Thus the radio silence.

In a further plot twist, on October 31, a week before I planned to leave town, the crew coordinator came down to the dock and offered me a contract as a paid deckhand through the end of the year.  This was completely out of the blue.  After some consideration, I decided to sign on through November.  Income, even in eensy quantities, is most welcome, but I promised my family I'd be home for Christmas this year.

The height of sailing season is past now, and the boats are in maintenance mode, only venturing outside the harbor once or twice a week.  Here's the view from the quarterdeck of the Exy on one such day. 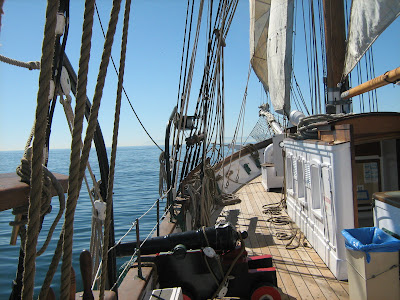 We recently hauled out Exy.  My prior experience with haulout has involved weeks of labor and numerous expensive setbacks.  Because this is a newish boat (launched in 2003), and because haulout was done at a boatyard that doesn't let you do any of the work yourself, this was a very different affair.  We were essentially only needed for the Coast Guard inspection (this involved crawling around in bilges, opening and closing stubborn through-hull valves).  And the end date was only extended by a few days.  In the meantime, we joined the crew of the Irving in living aboard their vessel.

This is how the Exy looked immediately after being hauled out of the water: 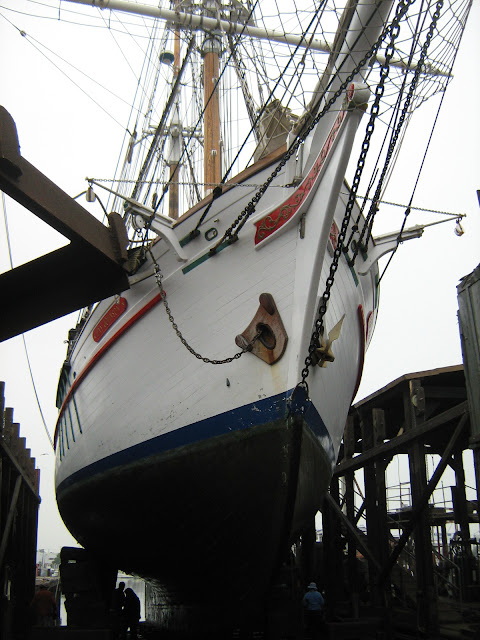 She is much cleaner and prettier now.

In the meantime, while not on a boat, I've been staying in Long Beach with old friends. One of them was born the day before I was, and we've been friends ever since. Here's a photo of us, Back in the Day. (My mom made the dresses.) 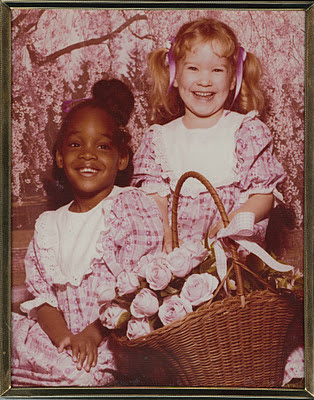 We've mostly had to be long-distance friends, so it's been very satisfying to have time to catch up, get to know each other as adults (or some reasonable facsimile), and discover how much we still have in common (quite a bit).  Last weekend we went for a hot-air balloon ride together.  It was lovely. 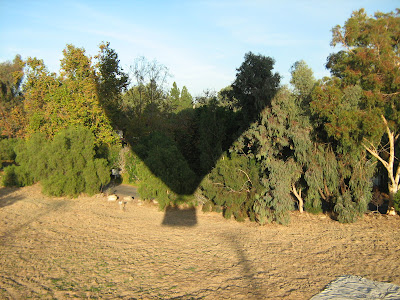 I still have a lot more to say about Tassajara, as well as boat stories to tell.  I'm hoping to carve out more time this month for blogging, but I make no guarantees.
Posted by Lindsey at 12:57 PM