So, in mid-September, I take a break: a rest from my sabbatical, a hiatus from my vacation. Maybe that sounds a little weird; I've long since lost track of what "normal" feels like. That might be an unstated purpose for this downtime: to reclaim a little bit of normalcy... if there's any normalcy to be found in sleeping on the basement floors of various friends and family members for a month and a half. Like I said, I don't even know anymore. I do know that after all of this travel, there is tremendous comfort in stopping, spreading out, settling in; in the places and people you know best; in sorting through a year's worth of snailmail, sitting around playing computer games in your PJs in the afternoon, allowing yourself to internet until you're sick of it (note: for some of us this takes a loooong time).

I guess what I'm saying is that it's really, really good be home... even if I'm not staying.

Two weeks in my hometown, four weeks in the town I call home (Portland). The time is largely uneventful, and that feels good: quality time with loved ones, reacquaintance with old haunts. But one event does occur that rocks my world pretty hard. 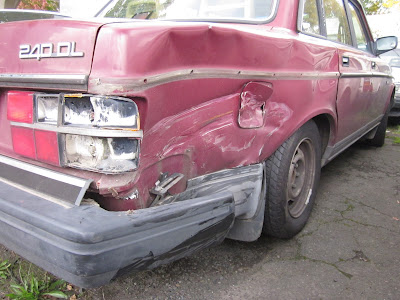 It isn't a big accident, really just on the more impressive end of fender-bender, but my insurance company asserts that my 1990 Volvo is totaled. Totaled? How can that be? This car that took me zigzagging across the continent and back, that didn't miss a beat after I rammed it into a West Virginia hillside, that kept me warm and dry and safe in deep snow and summer monsoons, totaled? My home and most loyal friend for the past two years, totaled? You don't just deem your friends totaled and walk away from them. Besides, it still runs just fine, aside from the part where the wheel grinds on the body, and the gas cap door doesn't open anymore....

A body shop provides an explanation: the rear quarter panel of a Volvo 240 is not easily removed. A replacement would have to be welded on, a time-consuming and finicky task. Apparently the insurance company's repair estimate of $3000 is actually pretty accurate.

On the bright side, after some tinkering with a 2x4, a crowbar, and a steel baseball bat (I love my auto shop!), the tire doesn't rub on the bashed-in panel anymore. "The damage is entirely cosmetic," points out one mechanic. "It's still a good car." 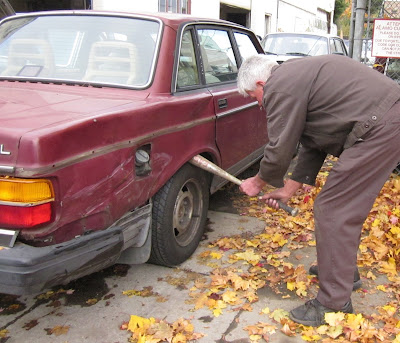 On the other hand, paying $3000 to repair the damage seems a little indulgent even for me, and as my dad points out, now would be a good time to replace it. I waffle, sulk, and pick through Craigslist ads, feeling naive and impatient. I test drive another Volvo 240; it's shiny, but it smells strongly of college-aged bachelor, and my mechanics shake their heads when they discuss the oil leak and the DIY wiring under the hood. "If you're going to replace your car, wait until you find something worth replacing it with," they tell me.

So October runs out, and with it, my time in Portland, where I have easy access to trusted and generous mechanics. I load everything back into the car and head north. The trunk seems less watertight than it used to be, but to be honest, it never really sealed well to begin with. I've packed accordingly. It works out.

After brief visits to old friends on the I-5 corridor, I hang a left from Seattle and get on a ferry to the Olympic Peninsula. My friend Willa lives there, outside of Port Orchard. She is four years old now, and she has a lot to tell me about. Her little sister is running around and forming complete sentences, and there's a brother I've never met before, who's crawling and growling and joyfully flinging food around at meals. It's all very exciting.

Willa's parents have invited me to come stay at their house until the end of the year while I write. I get a big second-floor room with a desk and a view of the woods. There's a baby gate at the bottom of the stairs, guaranteeing me some space from the smaller members of the household. And this far outside of any urban area, there's very little else to distract me (especially when the internet goes out). 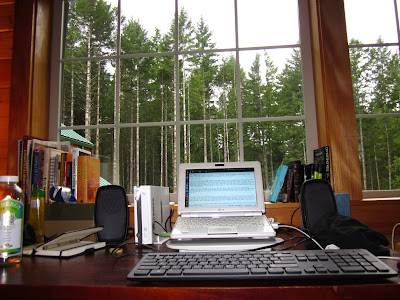 So now I've eliminated every excuse not to write about what I learned during two years of visiting intentional communities. It's time to relive that journey -- the hellos and goodbyes and everything inbetween -- in order to make it vivid for others. I hope the resulting book is something I'll be proud to share with you.
Posted by Lindsey at 3:59 PM