Where did I last leave off? Santa Fe, was it? There was Santa Fe, and then there was Silver City, and my old friend Meep and my new friend the otolaryngologist. There was the Sufi retreat, and the Dances of Universal Peace. There was the big tiny house in Las Cruces, the transplanted friend who loves Albuquerque skies, the day-long drive to the Denver airport (which, it turns out, isn't even in Denver anymore) and the handsome communard who flew in from Virginia to see me again. There was tiny Walsenburg, and the Garden of the Gods, and then there was Denver again, and Boulder, an internet friend, and a dizzying array of housing co-ops and co-housing and Couchsurfing hosts. There was Wyoming -- no intentional communities in Wyoming, or at least none that want to be found. But an old friend lives there with his family, in Lander near the mountains, and I spent a happy Labor Day weekend with them. Then there was Boise and Permacultureland, and after that, just one more state line between me and home. 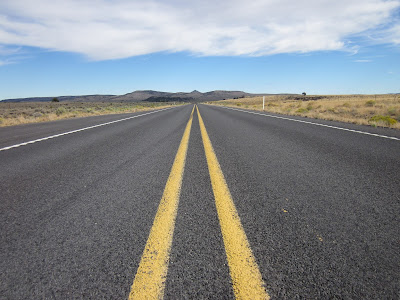 Eastern Oregon is interesting enough in its own right: flora and fauna and a climate that all feel exotic to me, coming from the rainy western side of the state. My problem is that there's just so much of it. It's fun for the first few hours and then I'm restless and ready to be done with it, long before I hit Bend. After driving across Idaho, Oregon just feels incredibly wide.

But eventually, I get to Crater Lake. 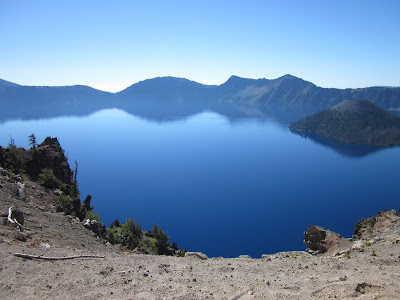 The expanse of shimmering blue shocks tears into my eyes. Finally. I made it!

I was born in Oregon. I was raised in Oregon. I've spent most of my thirty-mumble years in Oregon. But in all this time, I've never managed to get myself to Crater Lake, Oregon's most praised scenic attraction. When I planned this journey's endgame, I resolved to correct that.

I camp at Diamond Lake, far to the north, because the Crater Lake campsite is double the price. Diamond Lake is a beautiful spot, but my arrival is eerily reminiscent of another camping trip I took last year. I'm on my own this time, and I don't bother with a campfire, and I don't get my car stuck in the mud amid hordes of mosquitoes. However, I do get turned around trying to find the place. I do stop for directions on the wrong side of the lake at dusk. I do pitch my tent with the help of headlights. No matter. A whole sunny day to explore Crater Lake is worth the trouble and then some. 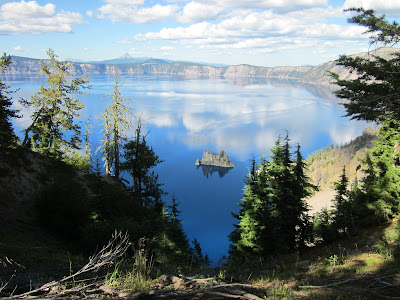 I have one last community to visit before the end: Gypsy Cafe, a small community in rural southern Oregon that doubles as the publishing headquarters of We'Moon. Back in 1981, residents of a women's intentional community in Denmark hand-lettered a feminist astrological datebook titled We'Moon. They published it themselves and distributed it across the continent via backpack. Improbably, We'Moon has endured for over three decades, maturing into a lovely and very polished anthology of women's art and writing. The women of Gypsy Cafe work for We'Moon, but they also work to sustain themselves by building and tending the land. My week-long stay comes at a bit of a lull in the action, so there's time to sit and talk and read and learn, as well as can pears and picante sauce, pick apples, and haul firewood down the hill. It's the perfect place to pause, near the end, and reflect on what I'm doing before it's over. 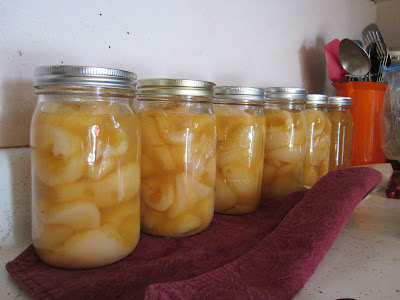 A week isn't long enough to stay at Gypsy Cafe, but it's the time I've allowed myself. I wave goodbye to my new friends, promising to return, and head north.

Just one more stop before home: a brief visit to Grove Christian Camp, the first place I ever got a taste of life in community (albeit a very temporary sort). For most of my childhood, this was my favorite place on earth. But when I left for college, my church started sending its youth to a different camp, and I never got to see it again. 20 years later, visiting this place gives a feeling of symmetry to the end of my journey. I meet up with the current caretaker, who gives me a tour of the place, showing off new buildings, ADA-approved walkways, improved bathrooms. It's all very recognizable, but very changed... much like myself, I suppose. 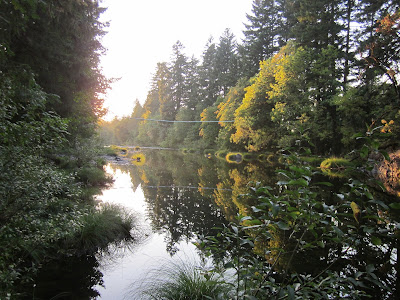 I can't stay at the camp, but that night I sleep nearby, at Dorena Lake. In the morning I clamber down the bank to put my feet in the cold water. It's September 15th, and everything is a birthday gift: the head-bob of a walking crow, the taste of a ripe Oregon grape, the glint of a lure tangled in a tree root. I roll up my tent and set out, at last, for my hometown. I remember trips to Camp taking for-ever... but after all this travel, it seems like a very short journey indeed.
Posted by Lindsey at 2:47 AM