There are many doors into the Sri Sri Radha Vrindaban Chandra Temple at New Vrindaban. When you enter the building, no matter which door you use, you take off your shoes. There are shoes in the entryway to the ashram, shoes in the hallway with the administrative offices, shoes in the main entrance. 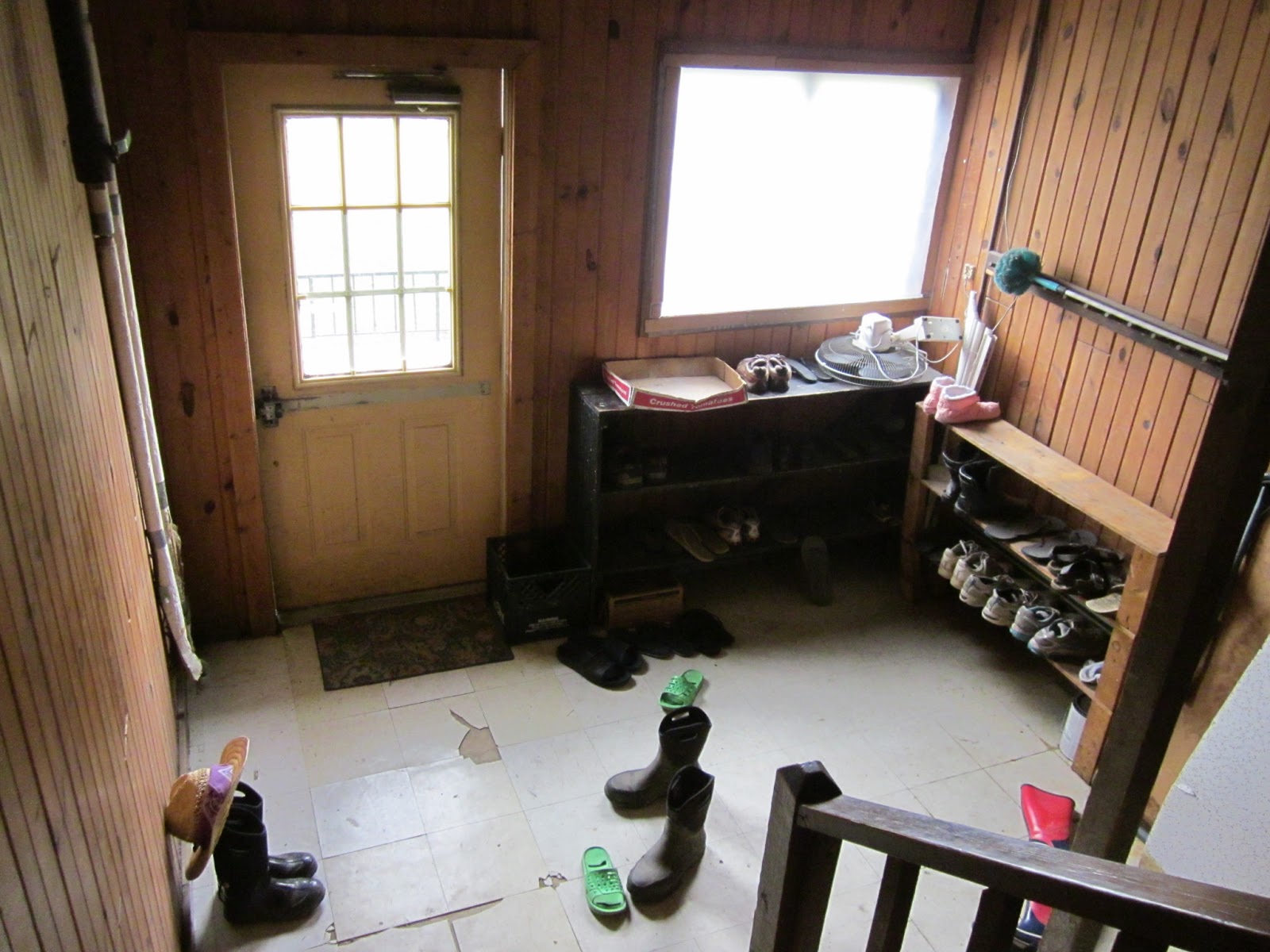 I have yet to fully explore the temple building, but as far as I can tell, there are only two ways to get from one side to the other: you can walk through the vast, ornately decorated central hall of the temple, or you can put your shoes on, go out and come back in through a different door, and take them off again. The ashram where I sleep is on one side of the temple, and food is served on the other. As a result, I frequently go padding through the central hall in my socks, whether or not any of the many daily ceremonies are going on. This is apparently no big deal.

The grand hall is three stories high in the middle, with a stained glass ceiling shielded by skylights. The sides are two stories high, and their ceilings are the floors of the ashram. So I can hear the morning ceremonies begin at 4:30 with a breathy conch shell blast and repetitive singing: Hare Krishna, Hare Krishna, Krishna Krishna, Hare Hare.... One of these mornings I will actually get up to witness this ceremony in person, but for now, I roll over and let the music soothe me back to sleep.

Every time I walk through the central hall of the temple, I notice something I haven't before. There's a lot to look at. It is surrounded by altars with doll-like figures on them. "We call them deities," says one devotee, when I ask about them. "A less polite word would be idols, or statues." Every day the deities are dressed in new coordinated outfits, with matching flower garlands: cheerful red and white, peacock blue, girly lavender and pink. Though they look different, most of the deities represent various incarnations of Krishna: Krishna with his wife, Krishna as a fierce lion-man, Krishna with his brother, Krishna as a limbless wooden doll with eyes like dinner plates.

And then there's Prabhupada, the guy who brought the Hare Krishna movement to the US in the '60s. He's represented by a disturbingly lifelike sculpture seated on the north side of the room. Occasionally, when the room is empty, I pad over to look closer and make sure he's not blinking. Prabhupada's robes stay orange, but in the evening his bald head is covered with a little orange stocking cap. I wonder if this is to keep him warm at night, or if he just likes to rock that look sometimes. 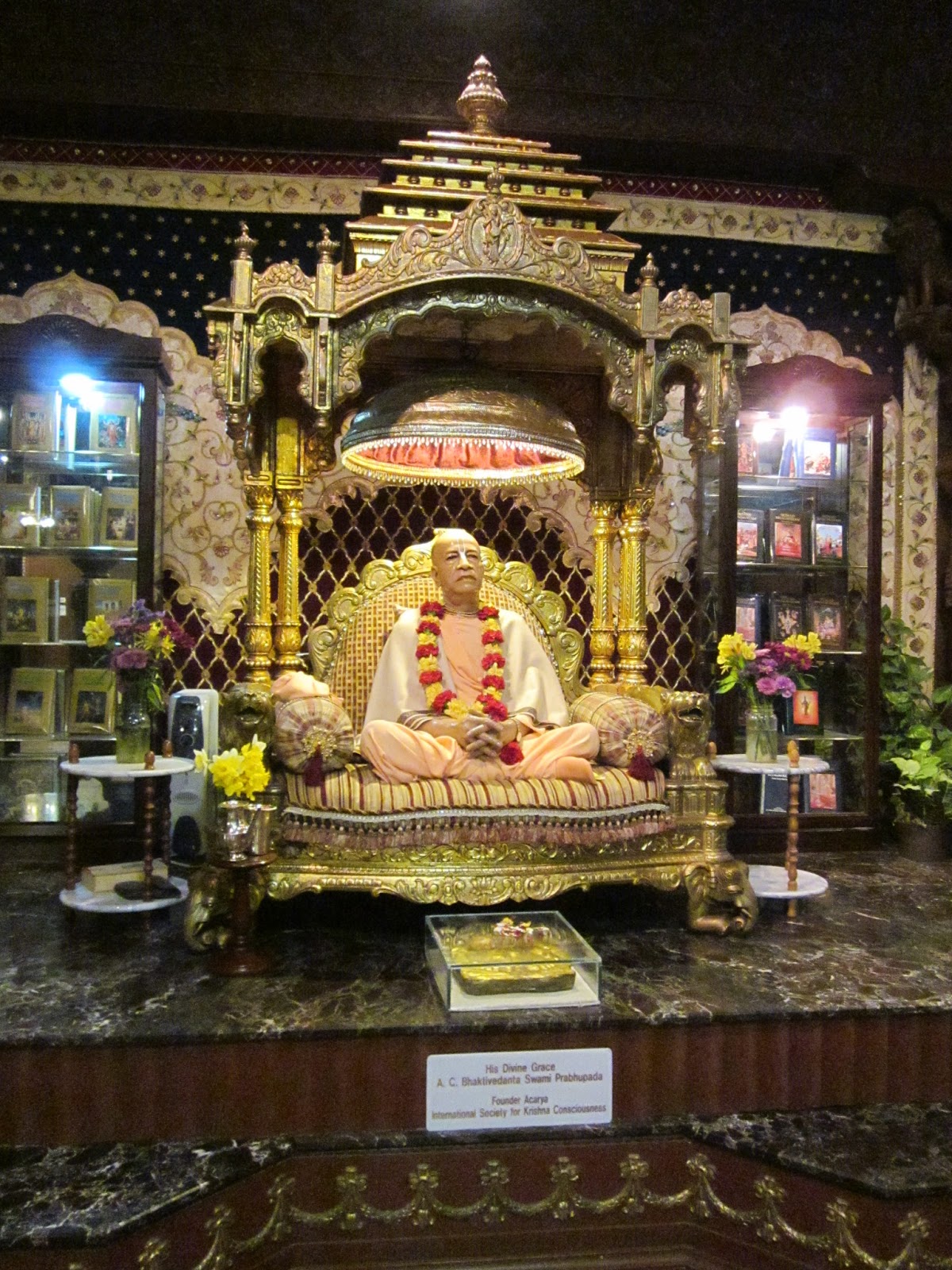 I'm planting snow peas in the Teaching Garden, tucking them into rows of fluffy mulch. The weather has been bad for planting this spring. The peas are very unhappy in the greenhouse, flopped over listlessly. Their roots are curled into little spirals, hunting for a way downward. It may already be too late for them to survive.

I think about the devotee who is tasked with "caring for Tulsi," which seems to refer to the holy basil plants in the immaculate greenhouse above the ashram. It is hard to get her to talk about her job, but I gather that it's more ceremonial than practical, involving singing and dancing and waving of ghi lamps with a heart of pure devotion. I think of all the studies indicating that talking to plants results in more vigorous growth. I think about Skeeter's plant walk at Singing Alive the Okanogan, where people sang little impromptu songs to the wild plants, and how that was funny and weird and at the same time made sense to me.

I pry the peas out of their plastic cells with a spoon. They're so naked and fragile. They need all the encouragement they can get.

I sing it while easing them into the dirt, pressing it down around them, propping them up with clods and straw. Eventually I find some more words:

The melody is deliberately cheesy, to indicate I'm not taking this seriously. It reminds me of something we would've sung in grade school, maybe after putting seeds into styrofoam cups. I suppose, given the location, it would be more appropriate to sing the Hare Krishna mantra. But I figure they're going to hear that a lot anyway.

Inbetween singing, as I trowel out the next hole, I can hear songbirds, frogs, the voices of men renovating a building across the road, the muted roar of a distant coal mine ventilation shaft. The peas are quiet.

It's so silly. But so are a lot of things we do to care for each other. You never really know which ones are going to have an effect. 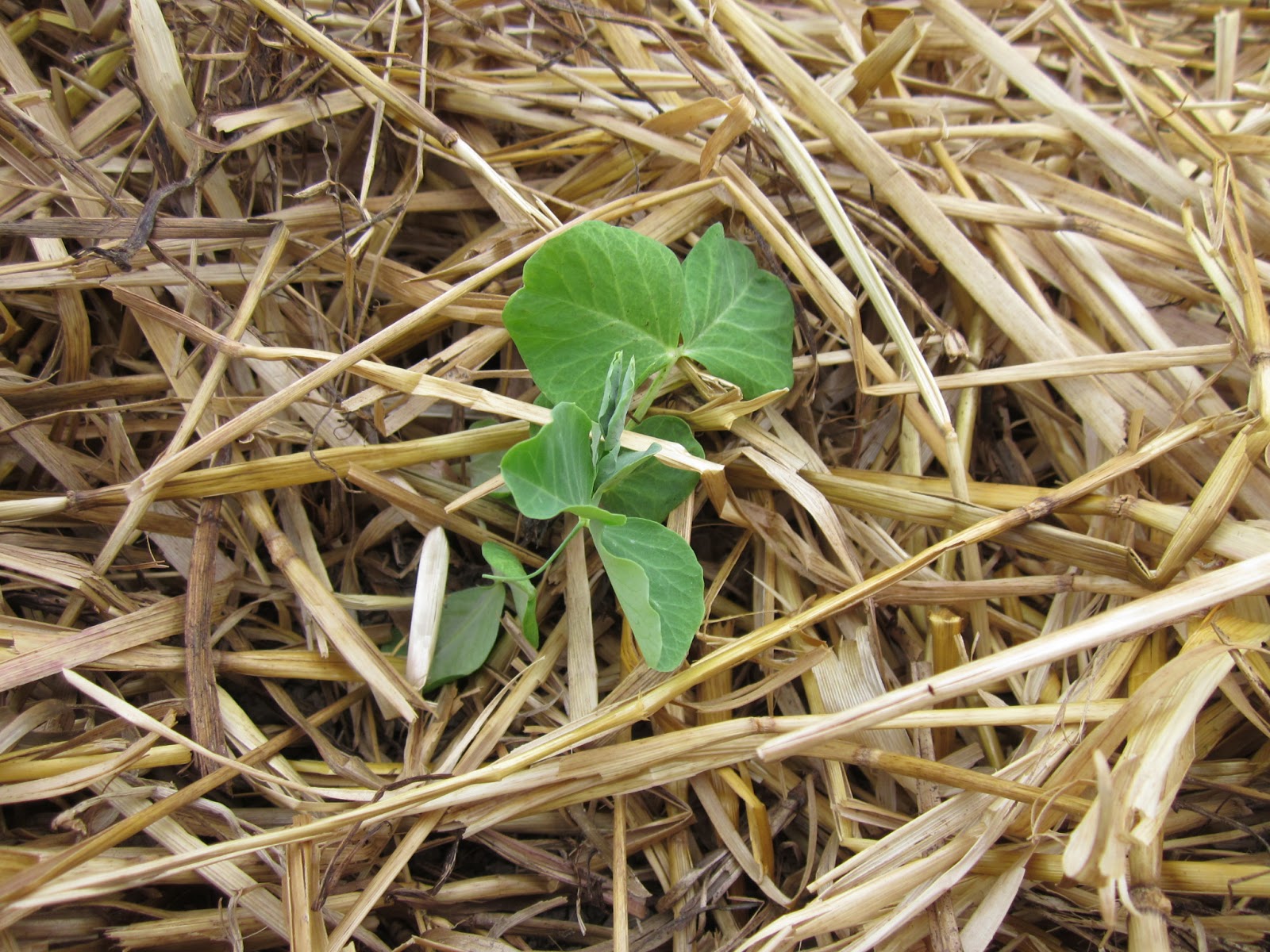 We eat in the prasadam hall. Prasadam is food that has been offered to Krishna. In some cases, this is very literal: food is prepared for the deities six times a day, and once it has been offered at the altar, it's carried into the prasadam hall, fair game for the rest of us. Those who cook for the deities are not allowed to taste the food while preparing it. "How do they know whether it's any good or not?" I ask, and the answer given is, "They learn." But this untasted food is delicious, like all the food here: vegetarian fare, prepared Indian style.

The two meals served for humans are breakfast and a late lunch; for dinner, you're on your own. There are always leftovers in the walk-in, but if you time it just right, you can get some freshly cooked Krishna-food after the evening service. A handful of people can often be found hanging around the prasadam hall at about this time. One of them is inevitably me.

"Hey, come join our table full of uninitiated devotees!" a young man calls to a newcomer, one evening when there's a particularly large group of us, maybe eight or so. He, like everyone else here, pronounces the word "di-VO-dees".

"Are you all uninitiated?" the new guy asks.

"Of course! That's why my name's Leon and not Acharyanandana or something."

"Do you get to choose your initiate name?"

"No, it's chosen for you. You just have to hope you get a good one." He laughs. "You could end up with one like Parikshit! Then it's like..." he shrugs: "Whoa, sorry about your name, dude." The entire table cracks up, incredulous. The name sounds like a really unfortunate combination of English slang.

"Yeah, that's pretty bad, right?" Leon's son, a chubby toddler, interrupts him by putting a half-spoonful of food in his face. He opens his mouth to accept it. "Yum yum, thank you!" 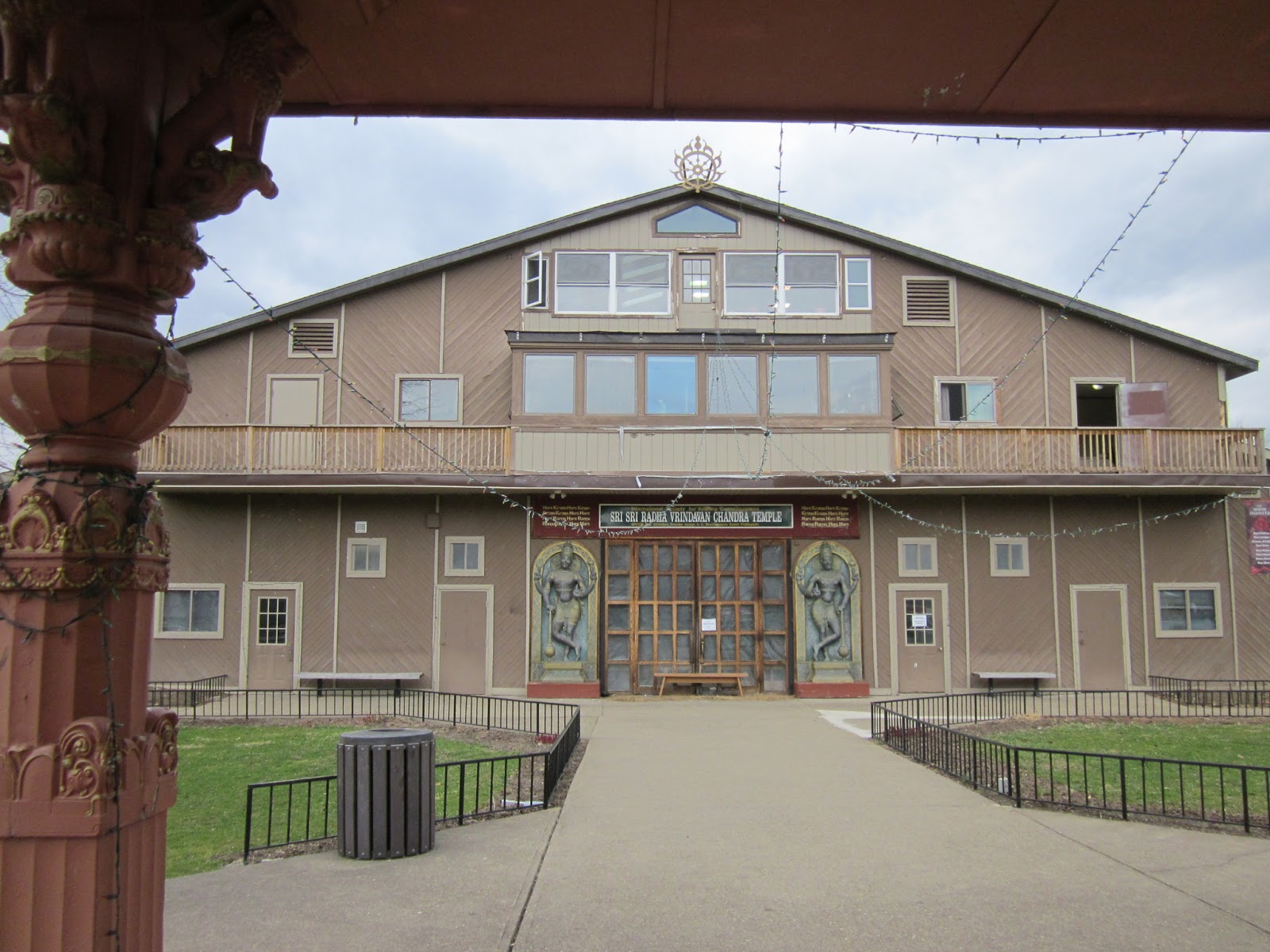 My room contains an altar with a peacock feather, a rose in a plastic water bottle, a couple of framed pictures of holy types, a battered Bhagavad Gita, and a dying kalanchoe in a pot. I recognize the plant because I've killed one before. After mixing a large quantity of soil for seeding, I use a little of it to repot the kalanchoe: maybe it's not too late for this one.

The young devotee who cares for Tulsi is charmed by my efforts. She invites me to come up and meet Tulsi sometime. I go up and look through the doors, but the greenhouse is locked.

Later, we're talking in the bathroom of the women's ashram, and she pauses to comment: "Ew, lovely, there's a cockroach in our bathroom." I tap the base of my steel water bottle quickly on the bug before it can scurry away. "Nooo!" she cries, dismayed. "How can you have so much love for the plant but no love for the cockroach?"

This is not the kind of question I know how to answer politely. "I'm sorry," I say instead. "I didn't know that would give offense." She finishes what she was saying, clearly disconcerted, and excuses herself hastily: it's almost time to go sing and dance for Tulsi. "Sorry about the cockroach," I say again, as she leaves.

"It's okay," she says over her shoulder. "Well, it's not okay, but..." and she hurries away down the hall, making conciliatory statements and canceling them out again until she's out of earshot. 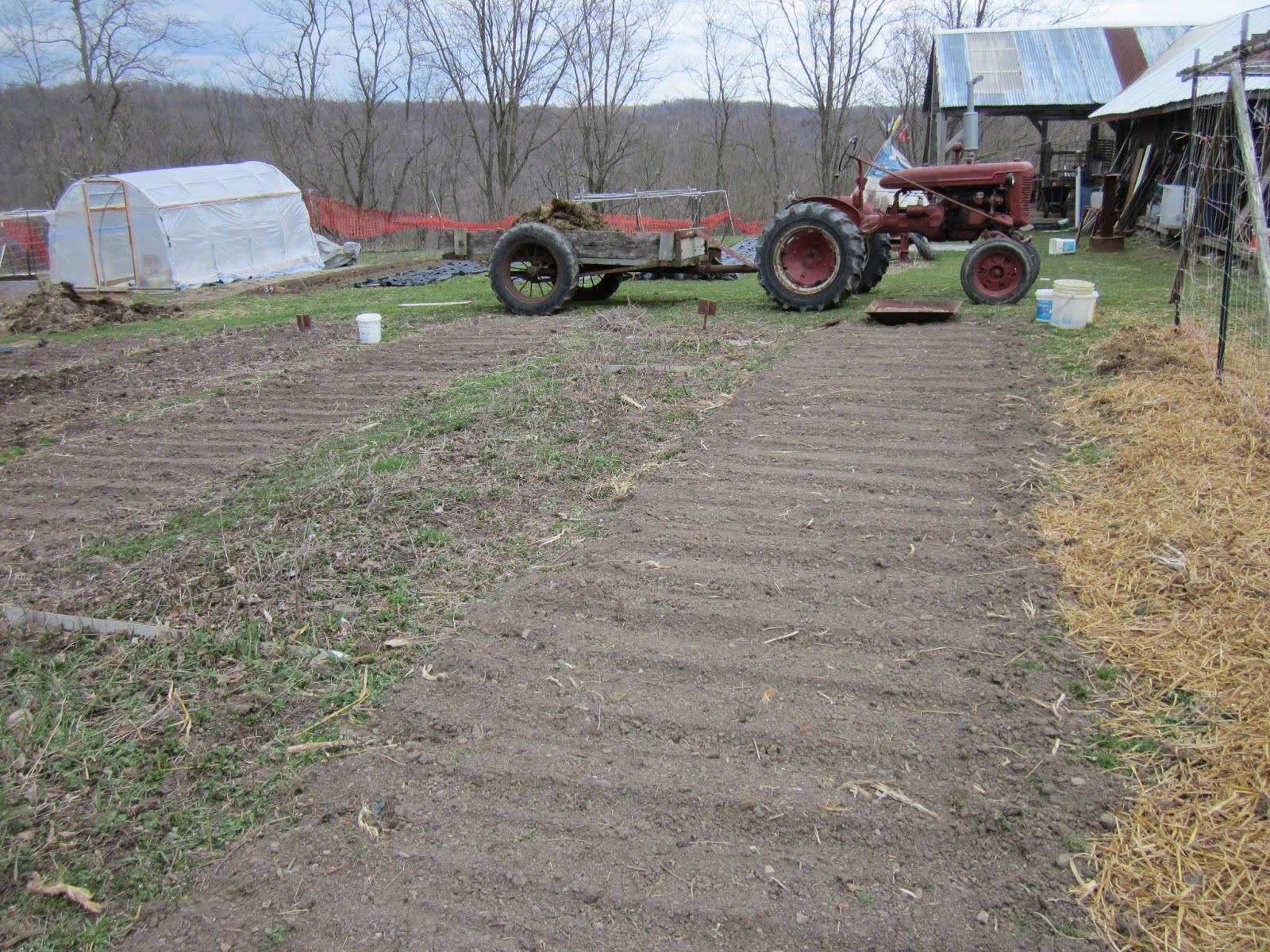 I'm preparing a bed to seed with kale and chard, raking it even, marking out rows with a board, tossing weeds to the side. (No love for the weeds, either, apparently.) It's getting on toward evening, and there's a lot left to do when the rain blows in: spatters, then gusts of pelting drops. I reach for my rain jacket.

The spring-warmed garden is rife with smells: fresh dirt, rich cow manure, dusty-sweet straw. But the smell of rain meeting the upturned earth is another kind of experience entirely, the most profound revelation I've encountered since arriving here a week ago. I pause to inhale deeper of this holy mystery. Deities, mantras, sacred vegetarian food: I mistrust them all, but this, this I believe in without reservation.

Thunder rattles in the distance. The shower passes. I crouch down and press seeds into the ground with the palm of my hand.
Posted by Lindsey at 9:11 PM