Full Circle, and Then Some

IT turns out that, despite its remote location, Holden Village is full of distractions: meals to share, people to get to know, crafts and music to make, conversations to have.  It's still very much winter here, and sleds and skis and snowshoes have beckoned with each fresh snowfall; when the sun breaks through and turns the road to muddy slush, we sit on the loading dock in deck chairs, soaking up precious Vitamin D.

So it is that now, at the end of March, I have yet to tell you about what happened at the end of December and January, much less afterward. It's hard for me to believe so much time has passed since my last post.

Returning to my hometown in December felt like coming full circle - though I consider Portland my home, it was from my parents' house that this foray into the unknown really began last August. Before that, I was retracing known paths.  Beyond it, I was setting out on a voyage of discovery.

So the weeks surrounding Christmas, for me, were a time of reflection and evaluation of my journey so far. If things were not going well, this would be a convenient time to bail, call it good after 4 1/2 months of adventures in California, and figure out what Plan B looked like. But things were, in fact, going better than I could've hoped for. My appetite for travel, exploration, and new experiences had only been whetted. One of the things I'm hoping to discover, in this journey, is a calling, something I have a passion for, which will sustain my interest over a period of years. While I've found many interesting things along the way, right now the one thing that I know I want to do next is continue doing exactly what I'm doing.

It's really gratifying when a plan works out as you'd hoped, especially such an unconventional one as this. The three areas in which I've had an eye out for potential plan-failure have been interest (am I tired of it yet?), health (can my body sustain the stress of frequent relocation and dramatic dietary changes?), and money (how long before my savings run out?). Thus far my enjoyment of the journey has very rarely flagged, my health is good (with the help of rest and home remedies, the cold I brought home with me quickly passed), and my finances are still in good shape, so: on we go.

The only piece of the plan I've reconsidered has been my mode of transportation. Before I left Portland, I thought: Driving is stressful. Looking after a vehicle is unnecessary effort. I'll do the first leg of my trip in my car, and then I'll leave it behind and cross the country on trains and buses and carpools. I'm in no hurry, and won't it be great to have time to write between destinations?

But I didn't expect to so thoroughly enjoy being in charge of my own transportation. Having a car allows me to get to out-of-the-way places without inconveniencing others; it allows me escape and isolation when I need it (a sanity-saver while I was living on a boat); and it allows me to bring along a whole lot more stuff than I ever could on public transportation. I can't truly claim to need all the things I have with me (all those clothes and mix CDs and toiletries and the banjo and the cooler and the folding bike and and and), but it's been awfully nice to have it, nonetheless.  And it's been a trooper, my little 1990 Volvo, going up steep hills and over unpaved roads like it ain't no thing. So I think, for the most part, the car stays with me. 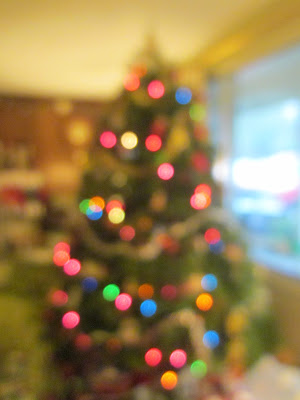 At Christmastime, I handed my five-year-old nephew the camera and told him to take as many photos as he wanted. He took the kind of portraits that only a small child can take, of people smiling adoringly and slightly goofily down into the camera, as well as a lot of photos of feet and lamps and TV screens and beloved toys. This was one of my favorites: a fine example of the "bokeh" effect striven for by a number of photography enthusiasts.

Christmas is the biggest event of the year at the Hoffman house, a time to see old friends, indulge in delicious food, and converse endlessly. On the morning of the 25th, as we have done for many years, four generations of Hoffmans gathered around a nostalgia-decked tree to open a mountain of presents, which takes approximately forever and really gets the whole gift-exchange hankering out of our systems for a good couple of months. (Well, for the adults, at least.)

After Christmas, having a bit of time to kill before my contract at Holden began, I decided to hang out in Portland a while.  I no longer have a residence there, but I was blessed by offers of hospitality from several people. So my original plan was to spend a few days with each host, in order to spread the burden of hospitality around. But my first hosts (known in internet circles as Sanguinity and Grrlpup) were so hospitable, and so obviously pleased to have me around, that I ended up just staying there. I slept soundly on a cozy mattress in the basement, shared meals and TV-watching time, and curried goodwill by washing dishes. (Note: this works almost everywhere, but is particularly effective in homes with no dishwasher.)

I thought it might be awkward to surf friends' couches, and I thought I might be a little sad not to stay in my own house (now occupied by a renter I've never met). But once I was actually back in Portland, when I thought about going back to the old place, I only felt relief that I didn't have to go back there again. There is a sense of weight to it that I'm so glad not to be shouldering right now. Also, it's much more fun to come home to friends in the evening than to an empty house.

And now I must apologize to those of you in the Portland area with whom I failed to get in touch while I was in town - I'm afraid there are rather a lot of you. I intended to, but time flew. I hope to catch you, if not when I'm next in Portland (which will be for only a few days), then definitely when I'm around later this summer.

Thanks to my last roommate's job at Columbia School of English, I rang in the New Year with a room full of Korean exchange students blowing paper horns, next door to some of the most preposterous architecture in Portland. And thanks to some good friends, I celebrated the Lunar New Year in good company at my favorite Chinese restaurant.

After an epic wild goose chase, I acquired a new pair of glasses that I really like, and vowed never to shop at Lenscrafters again. And I paid a couple of visits to my favorite Volvo mechanics at Alamo Auto Repair, who gave my car some well-earned love. 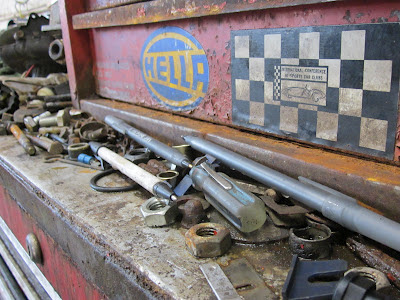 Grrlpup and Sanguinity introduced me to the Portland Classical Chinese Garden, which I've long known of but never seen. Despite its downtown location, it has a stillness to it, and an intricacy of design and layout that it would take me a long time to get tired of. 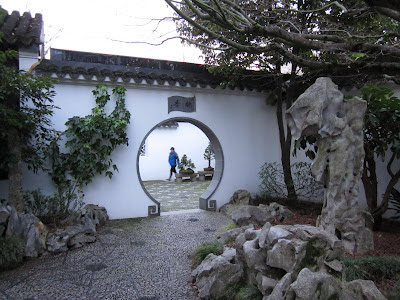 They also invited me to join them for lessons in Chinuk Wawa (or Chinook Jargon), a creole lingua franca long used by Pacific Northwest tribes in trading, and one of the official languages of the Confederated Tribes of Grand Ronde. Chinuk is taught informally at Portland State's Native American Student Center through a highly accessible system called Where Are Your Keys, which is fascinating in itself. It uses repetition, sign language, and simple games to teach vocabulary and grammar, without ever offering a definition of the words or phrases being taught. This steepens the original learning curve a bit, but it means that once a word is learned, you really know that word, not just the nearest English equivalent.  And it's effective; by the time I left, I had enough of a grasp of the language to play Settlers of Catan in Chinuk.

Learning Chinuk has been as satisfying to my left brain as solving a series of puzzles, with the added benefit of actually having some usable knowledge to show for the solving. It's also a highly social affair; as students build vocabulary, they begin to converse casually in Chinuk, getting to know each other and the language at the same time.  If I were staying in Portland, I would likely continue scheduling this event into my weeks, because it was Super Fun.

I also spent many hours at the Independent Publishing Resource Center, doing something I've intended to do since last summer: I printed up calling cards on an antique letterpress.  There is something so absorbing, for me, about the process of typesetting, and the elegantly simple technology involved in letterpress printing. (Volunteering in the IPRC's Print Shop is also on my list of Things To Do Someday in Portland.)  Here is something else I printed up, for a sample; the quote is from Tennyson's "Ulysses."

And there were many loose ends left untied from the summer that needed tying, and I also attempted catch up on my internet life, to connect with a handful of old friends, and to revisit my two favorite places for collaborative worship (Imago Dei Community and Multnomah Monthly Meeting), and then suddenly it was time to leave town and head north again, over the Columbia into Washington.

I stopped in Lakewood and took a ramble round Fort Steilacoom Park with an old friend.  The place was an insane asylum in the late 1800s, and still has an intriguing eeriness to it. 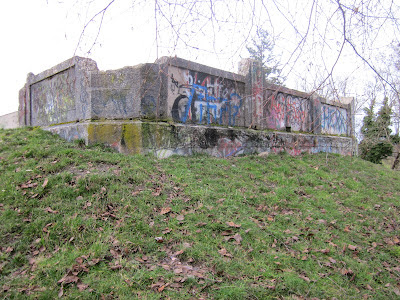 I visited several friends in the Seattle area, and was at one point, much to my delight, introduced as "Lindsey, from the Internet." I stayed a few nights in the U District, and discovered the real downside of traveling with car: in high-density areas, it's hard to find a place to put it. On the plus side, I got my first tour of the ridiculously gorgeous University of Washington campus (including a robotics lab not many people get to see). 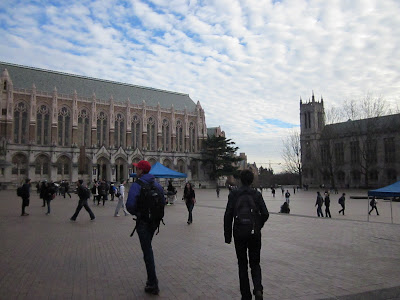 And then I went to Port Orchard, where my friend Willa took me on a tour of the Middle Point Military Reservation. We agreed that she and her family would move into the spacious Mine Storage Building, and I would take up residence in the cozy Mine Casemate, and we would have playdates. Here she is in her new home (though last I heard, they haven't settled in just yet). 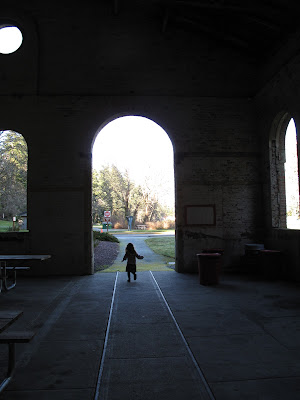