As of this writing, I'm currently residing at Holden Village, a remote community in the mountains of Central Washington. I want to clear a bit of a narrative backlog (blog backlog, a clog, a bog) before I tell you about that, but if you need to know more about Holden right now, well, here's the website.

THE first time I set foot on Soledad Street, I'm scared. All those signals that I'd been taught mean this is the wrong part of town are clearly visible: run-down and boarded-up buildings, lifeless graffiti, dingy people slouching on the sidewalk wearing unfriendly expressions, or inappropriately friendly expressions, or no expressions.  There are makeshift tents and shopping carts laden with personal collections of things.  Occasionally, a really nice car cruises down the street, pauses for a minute or two while holding a brief exchange with someone on the sidewalk, and then disappears. My internal alarms are blaring: Get out of here. Get out, now, it's not safe, go.

But I'm here with the Companions, and we're going to Dorothy's Place.

Dorothy's Place is a brightly-colored two story building, planted on Soledad Street, right in the heart of the worst neighborhood in Salinas.  The facility offers a soup kitchen, a distribution point for donated food and clothing, a safe place to hang out during the daytime, a tiny medical clinic, and a no-questions-asked women's shelter at night. Down the street are a lush community garden, a small screenprinting shop to raise funds and provide jobs, a computer lab for adult education, and an art studio/gallery with its own coffeeshop. And all of this began in 1982 with a lone monk handing out sandwiches.

It's the evening of December 12, and we've been invited to the House of Peace for dinner.  It's located on the second story of Dorothy's Place.  I first hear the House of Peace described as a group home for women who are transitioning out of homelessness, but in fact some of them are unlikely to find a home anywhere else, and there doesn't seem to be any pressure on them to do so.  Instead, they are expected to be clean and sober, respect one another, and contribute to the household in various ways.

Sticking close to my friends, I slink past the shadowy figures loitering out front and through the door that is unlocked for me.  Inside, we climb the stairs to a hallway that opens out into a warmly lit kitchen/dining area.  The long table is already nearly surrounded by people; there are just enough of us to close the circle.  "You're just in time," someone says, and we grab hands and take turns saying something we are grateful for. Various members of the household are grateful for food, for each other, for word from distant family. I am grateful for safe travel and a hospitable welcome.

Dinner turns out to be chili; I don't know if it's homemade or canned, but it's tasty.  No one at the House of Peace is a vegetarian, but they've made a small portion of meatless chili for their vegetarian guests.  (Not me; I'm a carnivore.)  I talk a little to some of the House of Peace residents, but mostly to my new friends from over on Jefferson Street, where I'll be staying during my time in Salinas.  The small housing complex on Jefferson Street is home to most of the Companions of the Way.  (A couple of them also live here, in the House of Peace.)

Companions of the Way began as the Franciscan Workers of Junipero Serra, a Catholic Worker community for those who work with the homeless in Salinas. It has since evolved into an interfaith community, numbering people of several religions and of no religion among its members.  I met its current director, Rick Slone, when he was passing through Tassajara; he's a Zen priest.  Everyone at Companions of the Way works full-time (or nearly) with the homeless.  In return they receive simple housing, a small monthly stipend, and all the donated (i.e. boxed or canned) food they care to eat.  So here, at this dinner table, is the intersection of two intentional communities: the House of Peace and Companions of the Way.

After dinner, I return with the Companions (the ones who don't live here) to Jefferson Street.  It's only about a mile away, but the neighborhood is dramatically different: a run-down residential area, home to lots of seasonal farm laborers.  It feels foreign to me, but definitely safer.  The Companions' home on Jefferson consists of a row of four apartments, with two other freestanding residences, and a sprawling yard peppered with colorful found-art constructions and unruly garden beds. (Here's, um, the driveway. My stay in Salinas is so short that I forget to take pictures until, literally, the very last minute.) 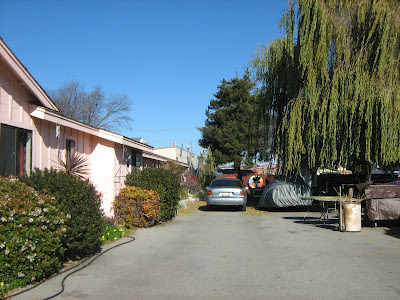 I get the "guest apartment", a humble one-bedroom that has been comfortably furnished with a mismatched miscellany of things -- objects left by former residents, I surmise, or perhaps donated.  The oven in the kitchenette has a sign on it that makes me laugh: OVEN IS BROKEN. DO NOT USE. DANGER! The heat's broken, too, but my hosts lend me a space heater, and I'm invited to use the full kitchen at the end apartment whenever one of its five residents is home to let me in.

The next morning we meet in a tiny room at the center of the apartment row for silent meditation (attendance encouraged, not mandatory) and "Check-In" (attendance expected). The tiny room fills up by meeting time, about ten people settling into floor cushions or perching on chairs, and the agenda is brief.  Each person expresses an intention for the day; some are about presence and mindfulness and compassion, and some are goal-oriented and highly specific.  My gaze wanders over the walls: a smorgasbord of religious iconography, much of which I can't even begin to identify.  Brief announcements are shared, and then we are each off to our respective days.  I am going back to Dorothy's Place with Rick; we will meet several other Companions there.

The dayroom of Dorothy's Place is chaotic, and my first day involves a lot of trying to navigate the chaos and figure out what it is I should be doing. This lack of guidance was deliberate on the part of the Companions: they wanted to give me time to decompress and decide for myself how I want to help. It's incredibly stressful for me, though. I just want someone to give me a job to do. I pace around a bit, loiter in the hallway, sit in the office and talk with the Companion on duty at the desk. The office has windows looking out on the dayroom, where maybe 30 people sit staring up at the wall-mounted TV screen, drink coffee, and eat Cheetos. Some are waiting their turn for the phone, the showers, or the laundry facilities. On an average day, hundreds of them will pass through Dorothy's Place. Some are just staying out of the cold. I am daunted by their griminess, their wildly divergent social boundaries, and my own feeling of helplessness.

Over the next couple of days, each of the Companions of the Way asks, directly or indirectly, how I'm holding up.  I get to meet about 10 of them (a few more are gone for the holidays). They're a diverse bunch, men and women ranging from early 20s to somewhere near 60, Catholics and Buddhists and Hindu and agnostics, with degrees from prestigious institutions and from the proverbial School of Hard Knocks (some of them have lived on the streets themselves). Some are prickly, some earnest, but all are welcoming in their own way.

I walk back from work with some of them, and am startled when they greet the pedestrians we pass, the sort of folks on the fringe I tend to overlook, as old friends. I join them for silent meditations and for a delicious potluck dinner, after which we read together from a book by Dorothy Day. I become a fixture in the shared kitchen, inadvertently drawing the normally reclusive residents of that apartment out to chat, and invite everyone over to my guest apartment (which has a large TV) to watch a movie.  I hate the movie ("Green Street Hooligans"), but the company makes up for it.  I like these people, and would gladly spend more time with them.

I wouldn't say that I become comfortable over the course of my four days at Dorothy's Place, but I definitely become less uncomfortable. I get to help sort mail, clean bathrooms, mop floors, serve soup, sort donations, make sandwiches. I learn about a few of the guests, from themselves and from the Companions' stories about them. Some are addicts, some mentally disabled, some are mysteries. I learn which ones respond well to friendliness, and which ones, for a spectrum of reasons, can't. I learn how Dorothy's Place is run, sometimes from the guests themselves. And I learn how slight is the distinction between my status and theirs.

It's scary to imagine myself as anything but obviously middle-class, normal, stable, and to imagine how easily I could lose the privileges of safety and respect that go with that status. Yet clinging to that distinction also creates a barrier between myself and the guests, a barrier built of my own pride. Several of the guests look every bit as mainstream as I do, and once, as I run out to help bring in donations from a shiny SUV, I see hesitation in the eyes of the carefully coiffed donor: Is this person snatching my donations a member of the staff, or...?  On my last day, a homeless older woman tells me where to find all the resources available to the homeless in Salinas, before inviting me to come stay at Dorothy's Place anytime. I am humbled... and honored.

I don't think working at Dorothy's Place would ever be easy for me; I don't think it truly is for anyone. But I was there long enough to get a glimpse of the kinds of challenges it would involve, and the kinds of support available for those challenges. It was the least glamorous of the stops I've made so far on my journey, but in many ways it seems like the most important. Every other place I've visited has involved some form of service to the outside world -- providing healthy food to community members, maintaining a space for spiritual practice and retreat, teaching kids about tall ships -- but this one existed solely to serve. Afterward, while groping for words to describe the experience, I told a friend: They're doing Jesus work. That feeling of deep significance, months later, will still tug at my heart, will still make me think about returning to Soledad Street.
Posted by Lindsey at 11:32 PM