First Day on the Little Farm

BEAU is learning to cook this summer, starting with breakfast. At this point he has mastered bacon, eggs, and cheesy potatoes, and I mean really mastered them. I fill up and then go to my first assigned task: spreading hay on the bare spots in the pasture in order to mulch, discourage weeds, and plant grass seed. It's not a very big pasture, and the bales are already distributed for me; I just have to use the sort-of-broken pitchfork to spread it around.

The hay comes off the bale in flakes that remind me of shredded wheat. The pitchfork is awkward, and my pitchfork skills are basically nil to begin with, so I eventually resort to Maya's suggestion of spreading it by hand. The other part of the task is pulling up star thistle, which blends in with the other vegetation so that just when you think you've gotten it all, another plant pokes you in the shin. 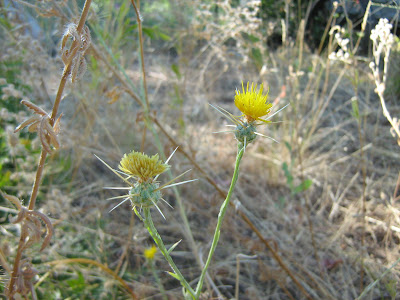 You can see the problem: it would be pretty painful to eat. So I pull and spread, and pull and spread, and my clothing collects burrs and hayseeds while my nose collects dust, and the shade shrinks as the sun gets hotter. I begin to feel I've been doing this forever (though it's actually been, maybe, an hour and a half). The pasture is small, but the work is slow... or rather, I am slow, and slowing; I think I can get better at this job with time, but I'm pretty sure I'm not going to finish it this morning. On one of my many trips in to refill my water bottle, Maya invites me in to help with lunch. Today, this turns out to mostly mean sitting and talking to her while she prepares lunch.

Over the meal, which is, of course, delicious, Maya begs Ray to go to "the Pipe" for a swim. He's been using the sawmill to cut logs, and is anxious to finish the job today, so he says, "You guys can go without me." Then, with no further pressure, he abruptly relents: "Okay, I'll go. But just for an hour."

The Pipe is so nicknamed for the fat irrigation pipe suspended above the swimming hole, which provides a prime spot for jumping off. The water is incredibly clear and shriek-inducingly cold. Today, though it's a weekday, we're soon joined by ten or so others: sunbathing college kids, twentysomething stoners, a middle-aged guy with a pot belly and beers, two water-wary preschoolers in lifejackets, and a handful of extremely enthusiastic dogs. Feeling oddly timid, and too chilly to spend more than moments at a time in the water, I sit quietly on the shore and watch the genial interactions.

Back at the farm, I help Maya more in the kitchen: for-reals help this time. I've been offering to wash dishes at just about every opportunity, mostly because it's a way to help that involves minimal opportunities to screw things up. Last night, Maya cheerfully informed me that "Being a farm wife is a lot like being a scullery maid," because there are always so many things to wash. So my assistance with the endless task of dishes is making a better impression than I could have hoped. Meanwhile Maya, though busy with other tasks, is overflowing with explanations, instructions, anecdotes, and helpful information on a multitude of topics.

Then there is dinner, and after dinner I'm washing more dishes, because why not; but the topic of who's done dishes lately comes up, and before I know it Ray has been shamed into taking over for me. He's worked a lot harder than I have today, but my weak protestations are overruled, so I hang out until milking is done and we all settle into the screened yurt to watch a movie, Netflix'd of course: "Babe." You know the one, about the pig who learns to herd sheep? None of us have seen it in ages, and I'm curious to see what filmmaking blunders will become apparent now that I'm in the company of people who really know pigs. There isn't much; one rear shot of Babe is, to my hosts, obviously that of a girl piglet, but the only other near-criticism is "That's the slowest-growin' white pig I've ever seen." More attention is given to the phrase "It's the way things are!" as an explanation for why certain farm animals are regarded as food by humans. This line will be quoted over and over again throughout the coming days. The line "Christmas means carnage!" (as recited by the film's Greek chorus of mice) also meets with much merriment.

When at last I tumble into bed, I fall asleep pondering whether I can manage to come back here again next summer.
Posted by Lindsey at 9:21 PM